Why living longer should not lead to benefit cuts. 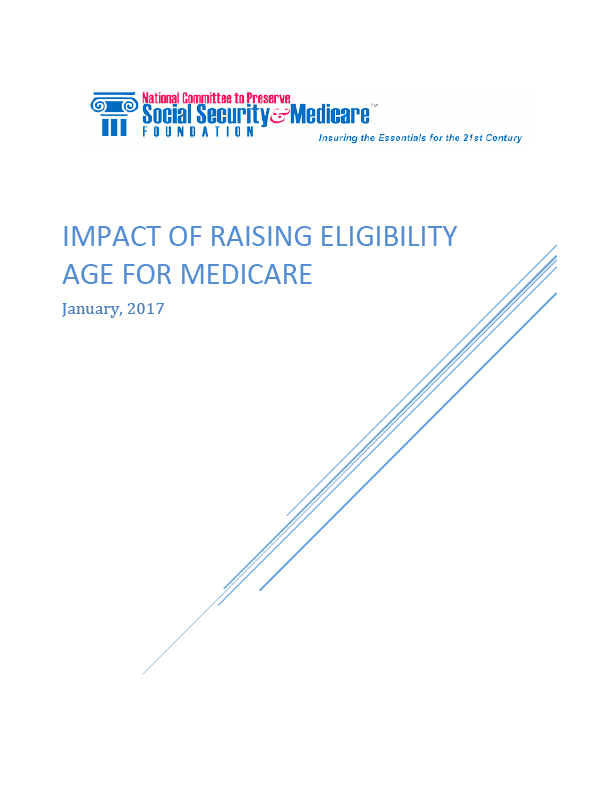 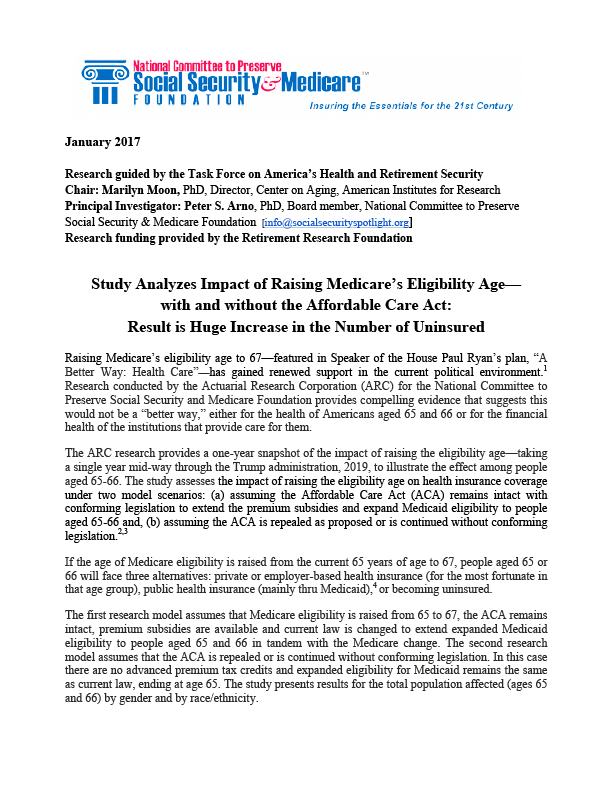 Study Analyzes Impact of Raising Medicare’s Eligibility Age— with and without the Affordable Care Act: Result is Huge Increase in the Number of   Uninsured

Raising Medicare’s eligibility age to 67—featured in Speaker of the House Paul Ryan’s plan, “A Better Way: Health Care”—has gained renewed support in the current political environment.[1] Research conducted by the Actuarial Research Corporation (ARC) for the National Committee to Preserve Social Security and Medicare Foundation provides compelling evidence that suggests this would not be a “better way,” either for the health of Americans aged 65 and 66 or for the financial health of the institutions that provide care for them.

The ARC research provides a one-year snapshot of the impact of raising the eligibility age—taking  a single year mid-way through the Trump administration, 2019, to illustrate the effect among people aged 65-66. The study assesses the impact of raising the eligibility age on health insurance coverage under two model scenarios: (a) assuming the Affordable Care Act (ACA) remains intact with conforming legislation to extend the premium subsidies and expand Medicaid eligibility to people aged 65-66 and, (b) assuming the ACA is repealed as proposed or is continued without conforming legislation.[2],[3]

If the age of Medicare eligibility is raised from the current 65 years of age to 67, people aged 65 or 66 will face three alternatives: private or employer-based health insurance (for the most fortunate in that age group), public health insurance (mainly thru Medicaid),[4] or becoming uninsured.

The first research model assumes that Medicare eligibility is raised from 65 to 67, the ACA remains intact, premium subsidies are available and current law is changed to extend expanded Medicaid eligibility to people aged 65 and 66 in tandem with the Medicare change. The second research  model assumes that the ACA is repealed or is continued without conforming legislation. In this case there are no advanced premium tax credits and expanded eligibility for Medicaid remains the same as current law, ending at age 65. The study presents results for the total population affected (ages 65 and 66) by gender and by race/ethnicity.

The results are stark in both scenarios. Even with the ACA intact and modified to extend access to Medicaid to people aged 65-66, the number of people who would become uninsured rises significantly for both men and women and for all racial and ethnic groups. With repeal of the ACA the rate of uninsured increases even more dramatically.

According to ARC projections, if Medicare eligibility is raised to age 67 and the ACA remains in effect, by 2019 the percent uninsured among those aged 65 and 66 will increase more than nine-fold, from less than 2% to 18.7% (1.9 million people). If the ACA is repealed the uninsured rate will increase to 37%, more than one-third of those 65 and 66, affecting 3.8 million seniors.

In the first model (the ACA remains intact), the uninsured rate for people aged 65-66 does not vary much by gender (18.6% and 18.7% for men and women, respectively). However, significant disparities are apparent by race/ethnicity.[8] Fully one-fifth of Whites in this age group would be affected, experiencing the highest uninsured rate (20.3%); rates for Black, Hispanic and other 6 at 11.2%, 13% and 14.9%, respectively.

Medicaid protections for those with limited financial resources are particularly important for keeping up the rates of insurance coverage. Racial and ethnic minorities have dramatically lower income and asset levels compared to Whites[9] and thus they more easily meet the strict requirements to qualify for Medicaid. This is particularly true under the first scenario, in which Medicaid is more readily available through the ACA’s expansion.[10]

There is little question that increasing Medicare’s retirement age will demonstrably increase the number and percentage of uninsured people aged 65 and 66. Those who become uninsured will have greater difficulty accessing health care, and as a result these individuals are likely to experience worsening health status. This will also impact the Medicare system because when they do qualify for Medicare at 67, their poorer health will generate increased financial demands on the program.[11],[12],[13]

Because they would be older than other uninsured people, the 65- and 66-year olds no longer eligible for Medicare at age 65 are likely to forego needed medical care. This can only lead to poorer health outcomes and overall well-being, but may also cause individuals to rely on costlier care, like ambulance rides, ER visits, and hospital stays.14 To the extent they receive this care, those individuals are likely to experience financially crippling out-of-pocket costs. Repeal of the ACA would also eliminate the special protections that currently allow access to insurance without discrimination (pre-existing conditions clauses). Consequently, people with the most severe health problems would have the most difficulty in obtaining coverage and will generate significant costs for hospitals, providers and private insurers who experience “cost-shifting” as a hidden subsidy for care of the uninsured. In short, raising Medicare’s eligibility age not only would undermine the health security of millions of Americans but also threatens the financial health of the institutions that care for them.

[4] Individuals who qualify for Medicare as disabled under Social Security would retain their Medicare coverage and because of their relatively high and costly medical needs would reduce any projected savings to the Medicare program.

[5] Estimates were generated by analyzing patterns of health insurance coverage among people a few years younger than Medicare’s current eligibility age (60-64) and a few years older (65-69). These figures were then adjusted to account for changes in sources of health insurance coverage and participation in the labor force as people age. Projections are based on a spreadsheet-based simulation model developed from a variety of data sources, including Medicare claims and administrative data, the Medicare Current Beneficiary Survey (MCBS), the Health and Retirement Study, Medicare Trustees Reports, census data, National Health Expenditure projections of the CMS Office of the Actuary, the Medical Expenditure Panel Survey and the Current Population Survey. Sex and race/ethnicity distributions within insurance categories were obtained from the Cost and Use files of MCBS, pooling data on beneficiaries aged 65-69 from 2006-2011. For further details, see report prepared by the Actuarial Research Corporation for the National Committee to Preserve Social Security & Medicare Foundation, January 6, 2017.

[6] Respondents in survey data reporting race/ethnicity other than Hispanic, non-Hispanic White, or non- Hispanic Black are included as “Other” due to small sample sizes.

Social Security is our nation’s bedrock social insurance program. It protects American workers, their families and their children against the risks of poverty as a result of old age, death of a spouse or parent, or a life-changing disability. At a time of escalating inequality and declining retirement savings, the National Committee Foundation examines Social Security’s crucial and often neglected role in the economic life of communities in every state.

NOTE:
This report uses 2014 data, unless specifically indicated otherwise. Due to rounding some totals may not correspond to the sum of the separate figures.